Auckland Schools’ Debating is excited to host in 2019 the first ever Northern North Island Impromptu Cup. We are inviting teams from Northland, Auckland, Waikato and the Bay of Plenty, to compete in the exciting impromptu debating style.

Students compete in teams of two, and are given five minute preparation time for their debate. Speeches are also five minutes long, with no points of information. Although the format sounds challenging, it is also a lot of fun. There will be a detailed presentation on the style at the beginning of the tournament, so teams should not be intimidated by a new format.

Impromptu Cup is open to all debaters from Year’s 10 to 13, competing at any grade level.

When: Saturday 10 August and Sunday 11 August (Term 3, Week 1)
Where: Saturday at Westlake Boys’ High School. The break rounds on Sunday will be at the University of Auckland.
Who: The tournament is open to all Year 10 to 13 students.
Team Cap: Schools have guaranteed entry for 3 teams each (an additional 3 teams will be waitlisted and admitted dependent on tournament capacity).
Cost: $60 per team – this covers entry and lunch on Saturday. If the entry cost is a barrier to your school entering teams please let us know on the entry form.
Format: Five preliminary debates on Saturday, breaking 16 teams to the finals on the Sunday (note: all teams on Sunday will take part in a minimum of 2 debates).
Entry Deadline: Tuesday 30 July at 5pm

Motion/Side Selection:
1. A coin is tossed to decide which team will have the power to select whether they choose “motion” or “side”.
2. The team with “motion” will have one minute to select one motion from two options provided. At the end of the first minute, the team announces what motion they have selected.
3. The team with “side” will have one minute to select whether they will affirm or negate the motion. At the end of the second minute, the team announces what side they have selected.
4. Each team then has five minutes to prepare a case.

16 teams will break to the octo-finals. The break will include a ‘plate’ division, containing the 8 losing teams of the Octo-finals, a 3rd and 4th place playoff and a 5th and 6th place playoff. All teams will debate at least twice and will only be eliminated from the competition after losing 2 debates. 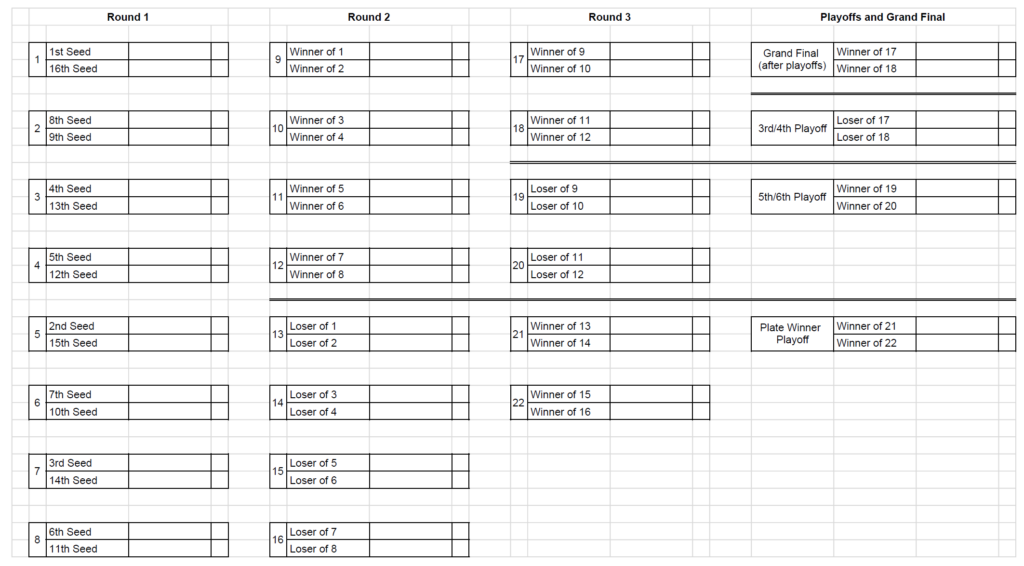 How should I structure my speeches in Impromptu Cup?

1st Affirmative – These speakers should deliver a compressed 1st affirmative speech. Speakers may consider only presenting 2 substantive points instead of 3 in order to ensure the material is sufficiently developed.

2nd Affirmative – A 2nd affirmative speech is a combination of a 2nd affirmative speech and a 3rd affirmative speech. Speakers should spend most of their time focused on point by point rebuttal (or points of clash style rebuttal), followed by a brief split point presenting new material. Alternatively, instead of a split, speakers could provide new analysis that extends or develops material presented by 1st affirming without making an entirely new point.

2nd Negating – A 2nd negating speech is most similar to a 3rd negating speech. Speakers should spend their entire time focused on rebuttal of the opposition case and should not present new material. This should follow a points of clash structure.

Negative Leader’s Reply – These speakers should deliver a normal negative leader’s reply. This should be focused on presenting a favorable summary of the debate.

Affirmative Leader’s Reply – These speakers should deliver a normal affirmative leader’s reply. This should be focused on presenting a favourable summary of the debate. While this speech should not contain new material or responses, speakers should try to respond to any new material/responses in the neg block (the combined speeches of 2nd Negating and Negative Leader’s) using analysis already presented in the case.

Who can deliver the leader’s reply?

Only the first speaker can deliver the leader’s reply.

Should you select “motion” or “side” if you win the coin toss?

It is generally suggested that teams should choose “side” if they win the coin toss. Choosing side allows teams to make the final decision over whether they should “affirm” or “negate”. This also provides the team with a slight head start over the affirmative team.

What strategy should you apply when picking the motion?

When picking the motion, teams should first consider how much knowledge they have on an issue, and secondly how balanced a motion is. Teams should aim to pick a motion where they think the affirming and negating case is evenly weighted, or alternatively a motion which is weighted towards the affirming team.

What strategy should you apply when picking the side?

When picking the side, teams should consider what side of the motion they consider the easiest or most intuitive. Teams are generally advised to pick negating (unless they think the motion is substantially easier for the affirming team). This is because the 1st negating speaker has an extra 5 minutes to prepare their speech compared to the 1st affirmative. Additionally, the negating team gets to respond last (at 2nd Negating) to material presented by the affirming team.

How many members can I have in a team?

Only 2 members from each team can debate. However you can have more than 2 speakers and rotate them throughout the day. We recommend you have no more than 3 speakers in a team.

Does my team need to attend on Sunday?

Only the 12-16 breaking teams advancing to the finals will need to attend on Sunday. If one of your teams can not make the Sunday please let us know in advance so we can exclude them from the break. All break rounds are open to the public so teams are welcome to attend to watch some high quality debates.

What is the format of the break rounds on Sunday?

The format of the break rounds is still to be decided. Depending on the size of the tournament, 12 to 16 teams will break. A format may be used which means that teams might continue to debate despite losing. This will be announced closer to the start of the tournament.

What ability level do my students need to be in to compete in Impromptu Cup?

All year 10 to 13 students of any ability level can compete in Impromptu Cup. At the start of the day we will be providing a presentation on how to do impromptu debating. This tournament will be good preparation for students considering entering Premier Advanced, Premier Junior or Advanced Open next year.